Casting one’s gaze across its 1,200 feet of coarse quarry sand, it’s easy to forget that University Beach was once like the rest of the Ward Island shoreline on either side – defined by discarded concrete and construction materials – until its restoration was complete in 2001 after nearly seven years of research and planning as part of one graduate student’s thesis.

The history of University Beach, which sits adjacent to Texas A&M University-Corpus Christi, is a complex one, according to Deidre D. Williams, Conrad Blucher Institute for Surveying and Science Coastal Research Scientist. A narrow beach between 50 and 100 feet wide was visible in aerial photographs from 1938 before eroding as a result of shoreline stabilization efforts to support the eventual commissioning of Naval Air Station Corpus Christi in 1941.

“There was all of this exposed sand, and it was mobile. So when the shoreline was stabilized and elevated by placing riprap and rubble along the shoreline – something that is common in bayside communities all along the Texas coast – what we discovered is that a beach couldn’t naturally accrete (build) anymore,” Williams said.

It was Williams who heeded the call to restore the beach. She started working at the Blucher Institute in the late ‘90s as an undergraduate who wanted to gain research experience.

“Initially, I thought I wanted to work with aquifers, but I found that it was even more interesting to study coastal environments, so this led me to studying beaches and inlet systems,” Williams said.

To help pay for the project’s studies and ultimate construction, the Island University partnered with the Texas General Land Office (TGLO).

The design Williams came up with is a concept based on the fewest number of structures required to maintain the beach: two terminal groins, or shore perpendicular structures at each end, and three detached breakwaters (shore parallel structures). Working closely with CBI was the Corpus Christi firm Shiner Moseley and Associates. The firm developed the final engineering specifications from the functional design. After five months of construction, which included the transportation of sand from an old Nueces River tributary, University Beach was completed in August 2001. The overall project cost was $1.5 million and was made possible by the cooperation and support of the Island University, the Blucher Institute, the City of Corpus Christi and the TGLO.

Following the beach’s restoration, Williams published her thesis, “A Recreational Beach Fill for Texas A&M University-Corpus Christi: Coastal Processes and Functional Design” in 2002. She is grateful to University administration for supporting her and providing this opportunity to fuel her passion for stewardship of our beaches. Williams now leads two long-term monitoring programs related to the management of beaches locally and all along the Texas coast (Coastal Erosion Planning and Response Act (CEPRA), Beach Monitoring Program) as well as the Packery Channel Monitoring Program.

The issue of renourishment was a challenging one to contend with. Even with the containment structures, Williams theorized the beach would need to be renourished with additional sand after a decade. In fact, the design has proven to be far more effective than the modeling effort and analysis predicted.

“We’re going on 18 years and we have done no maintenance, which would be an expensive endeavor due to transportation costs; this is a self-sustaining project due to the cellular design,” Williams said. “This is very unique in the world of beaches.”

Originally published on TAMU-CC website. By Richard Guerrero | Published: May 31, 2019 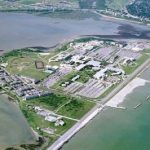 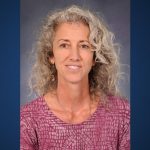 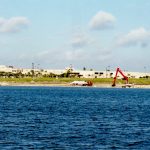 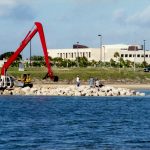 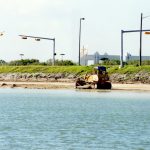 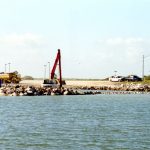 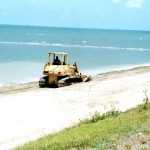 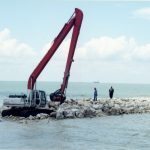