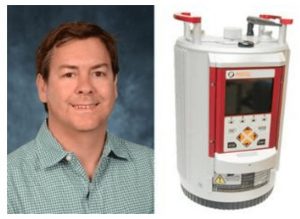 CORPUS CHRISTI, Texas – A laser beam is being used by researchers at the Conrad Blucher Institute for Surveying and Science (CBI) at Texas A&M University-Corpus Christi to monitor sea level rise impact and elevation of important coastal marshes. Serving as fisheries habitat for commercially viable species, such as blue crabs and sportfish, as well as providing nutrient filtration and erosion buffering, any change in sea level in coastal marshes has the possibility of impacting these delicate habitats.

Dr. Michael Starek, a CBI researcher and Assistant Professor of Geospatial Engineering and Geographic Information Science (GISc) at Texas A&M-Corpus Christi, specializes in the use of LiDAR, which stands for Light Detection and Ranging.

“LiDAR is a laser-based technology that pulses a laser, hundreds of thousands of times per second,” explained Starek. “A scanner then bounces the laser pulse off a surface, like a laser pointer, and measures the time it takes for the light to hit a target and reflect back.”

The research team is exploring LiDAR’s capability for measurement to help improve their ability to monitor marshes. The team has conducted baseline LiDAR surveys of marshes locally and at other marsh sites along the Gulf of Mexico in Mississippi and Florida. By conducting repeat surveys of these areas, subtle changes in marsh elevation over time can be resolved.

“To conduct these surveys, the scanner is mounted on top of a tripod and it scans an area in a 360-degree field of view,” said Starek. “We then move to another spot, scan again, and merge the scans to create a dense 3D model of the area scanned.”

Starek and his researchers are currently working on mobile LiDAR technology to increase the ease of scanning and enable mapping of wider areas.

“The scanner we are using for this project is specifically designed for high accuracy 3D terrestrial surveying,” said Starek. “LiDAR scanners have the ability to be mounted on vehicles, airplanes and even unmanned aircraft systems.”

The data obtained from LiDAR scanning can be downloaded onto a computer program that allows researchers access to valuable and accurate topographic information. This data can be used for multiple projects such as beach erosion monitoring.

The University of Southern Mississippi, Louisiana State University and the National Oceanic and Atmospheric Administration are some of the institutions and stakeholders currently in partnership with CBI using advanced technology including LiDAR to study other coastal issues such as elevation and flooding.