North Beach is an urban beach located at the north end of Corpus Christi Bay.  The beach is bordered by the entrance to Nueces Bay to the east and the entrance to the Port of Corpus Christi to the west.  North Beach was formerly referred to as Corpus Christi Beach until the official change of the name in July 2012.  This beach has a history of beach nourishment initiating with the USACE sponsored project during 1978.  In response to sand loss at the northeast end of the beach, a subsequent nourishment was conducted at the northeastern terminus and construction of a terminal groin was completed during 1985.  More recently, the beach was nourished in 2001 (CEPRA Cycle 1), with modifications completed during 2002/2003 to improve sand quality.  The most recent nourishment was completed during January 2016 and focused on restoring an adequate width to the west end of the eroding beach fronting the parking lot near the Lexington. The average rate of shoreline position change ranged -2.6 ft/yr along the entire beach to -6 ft/yr along the beach directly fronting the parking lot at the Lexington.  The rate of change for the region fronting the parking area was limited from further increase beach recession up to the concrete/pavement limit.

The majority of the backshore of North Beach is bordered by substantial infrastructure and development along with five public beach parks with associated amenities that are set forward toward the bay on the beach, including parking that is directly adjacent to the backshore of the beach.  The lack of a natural dune lined backshore influences the stability of North Beach.  Only the far northeast end of the beach has a natural buffer zone between the beach and backshore development. This region consists of low coppice mounds, small scale wetland and grassy flats.  The backshore limit was redefined along the northeast section of the beach by the construction of the concrete BeachWalk during 2012.

North Beach is an urban beach located at the north end of Corpus Christi Bay.   The location of the beach led to locals referring to it as “North Beach”, the beach is also referred to as Corpus Christi Beach.  The beach is part of Rincon Point, a natural spit that partially separates Corpus Christi Bay from Nueces Bay, a shallower secondary bay that is part of the Nueces River delta system.  Corpus Christi Bay is one of the deeper bays on the Texas Coast with water depth ranging from < 2 ft, along the shallow nearshore periphery, to about 12 ft.  The tide range is small, approximately 0.6 ft.  Meteorology dominates the along the Texas coast due to the relatively small tidal range and shallow water bodies. This is particularly evident during extended periods of strong winds out of the southeast, the dominate wind direction, and during intermittent passage of frontal systems which reverse the wind direction from fall to spring.  North Beach faces the southeast, therefore winds from the dominate direction act over a long fetch to produce onshore directed waves most of the year.  The angle of the wave approach results in longshore sediment transport that is directed toward the northeast.  The result is persistent erosion on the southwest end of the beach and net accretion on the northeast end of the beach, adjacent to the terminal groin. 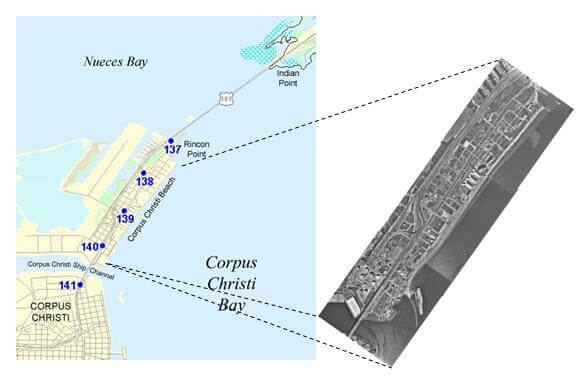 North Beach has a history of beach nourishment that started with a collaborative effort by the City of Corpus Christi and the USACE in 1978.  According to Kraus (1999), this may have been the last federal nourishment project construction effort that had recreational benefits as a primary justification.  The original beach nourishment combined a clay substrate with a sand veneer.  In an effort to limit losses at the northeast end a terminal groin was constructed in 1985.  Another nourishment effort was conducted by the TGLO in 1998 and included the manually redistribution of sand from the northeast end to the southwest in a process called “sand back-passing.”  The beach was most recently nourished in 2001 (CEPRA Cycle 1), with modification in 2002 and 2003 due to sand quality issues. This beach has been targeted for a nourishment program under CEPRA to maintain the valuable beach front access of this popular destination for tourists and local residents alike.  The beach itself is bordered by substantial infrastructure and development along with five public beach parks along with amenities and parking fronting the beach (Fig. 2).  The beach fronts a region specifically dedicated to tourism with the Lexington and Texas State Aquarium occupying the extreme southwest end of the spit. 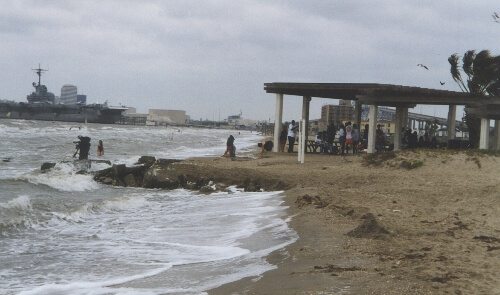 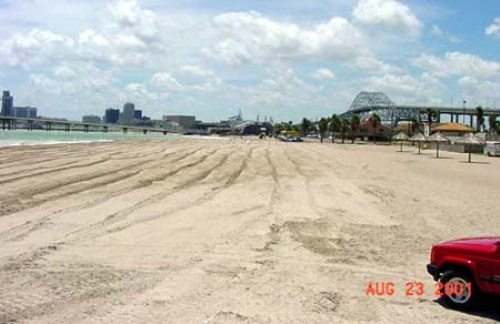 Surveys at North Beach include beach profile surveys and shoreline position surveys that consist of elevation data that describe the beach and shallow nearshore in Corpus Christi Bay.  Beach profile data is collected at in xyz format along shore perpendicular transects that are spaced at 200 intervals and extend from the dune or other landward limiting feature (for example; sidewalk or road) to the depth of closure (≈ -8 ft at this location).  Shoreline position data are collected at 5 to 10 ft intervals along the water/shore interface at the location of Mean Higher High Water (MHHW) calculated for this location. Changes in sand volume are calculated by comparing the beach profiles along the beach.  Monitoring program surveys have been conducted during 2007, 2009 and 2012. 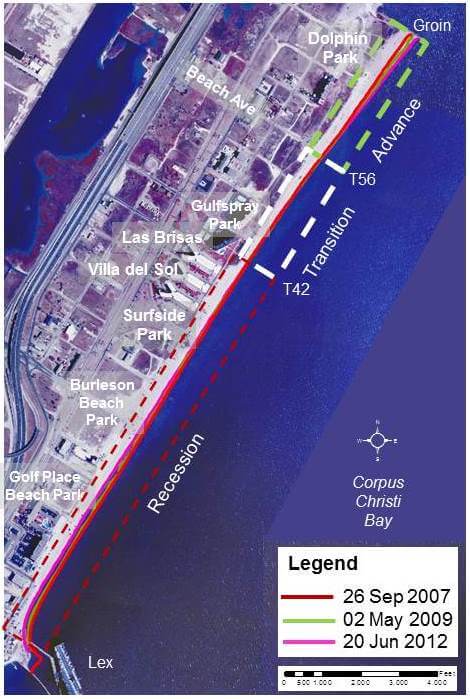 Historically, the beach has been most narrow on the southwest end due to erosion and sand migration to the northeast by longshore sediment transport resulting in a more landward position of the shoreline (shoreline recession).  Accretion dominates on the wider southeast end where the position of the shoreline has advanced (shifted toward offshore).  Between these two regions is a region of transition where the shoreline is relatively stable.  Nourishment efforts are focused from the southwest end to about the center of the beach with the northwest end of the beach functioning as a “borrow” site for reclaimed sand that is periodically moved to the southwest end.  Successful beach nourishment at this site incorporates borrowing sand from the southeast end with imported quarry sand that has a larger grain size than the native local sand.

Coastal Structures include a terminal groin located near the mouth of the Nueces Bay. The purpose of the groin is to reduce loss of sand at the north end of the beach.