University Beach (UB) is located in in front of the Texas A&M University-Corpus Christi campus on Ward Island, which forms a section of the south shore of Corpus Christi Bay.  The beach was constructed in 2001 (CEPRA Cycle 1) to restore a beach that had completely eroded some 60-years ago (Williams, 1999, 2000 and 2002).  Prior to restoration the shoreline had been stabilized with discarded concrete rubble and construction materials which restricted user access.  The beach has not required re-nourishment since its completion with stability attributed to the cellular design.  The cellular design includes a 1,200-ft long beach stabilized by two terminal groins and three detached breakwaters (DBWs).  Fill material consisted of beach-quality quarry sand with a greater median grain size (0.35 mm) than the native sand (0.15 mm).   The coarser than native fill material was selected in an effort to increase both shoreface slope, due to the relatively flat nearshore, and overall stability.  University Beach demonstrates a unique design feature in that sand eroding from the dry beach is impounded in the nearshore.  This design offers the potential for “self-nourishment” where sand can potentially be redistributed from the nearshore to the berm by land based equipment, thereby reducing the costs typically associated with importing sand for beach nourishment.  Such a redistribution of sand is recommended to increase the nearshore depth within the cell toward maintaining the integrity of the beach environment and discouraging the continued growth of seagrass.

The beach has been surveyed annually since construction was completed in 2001 in an effort to describe trends in sediment transport at the restored beach.  The dominant direction of sediment transport is toward the northwest, due to persistent and strong wind forcing out of the southeast, as indicated by shoreline advance at the west end of the beach.  The distinct sinusoidal planform signature of the shoreline is the result of wave diffraction from the tips of the detached breakwaters resulting in the development of salient features behind the structures.  Sand eroding from the berm tends to migrate into the nearshore where it is deposited in the sheltered region landward of the detached breakwaters.  Sand migrating into the nearshore has led to the formation of a salient which was first observed on the west end of the beach shortly after construction during 2001. The salient was well-developed by 2002 and the first of three tombolos, accretionary features forming between the shoreline and offshore breakwater, formed at the west end.  Tombolo features are now persistent and well-developed in the nearshore, landward of all three breakwaters.  Accretion in this area extends from the shoreline to the detached breakwater and during periods of low water level a tombolo can be exposed landward of each breakwater.  After a period of relatively stability between 2010-2014 (± 1.0 ft/yr) with limited influence of tropical storm activity, the average rate of shoreline position change increased to -7.2 ft/yr during 2014-2015.  This increase in rate reflected the influence of two extended periods of inundation associated with tropical storm forcing during 2015.  During the two storms, Tropical Storm Bill and Hurricane Patricia, peaks in water level ranged from 1.4 ft to 2.4 ft, respectively, above MHHW. The average rate of change in shoreline position since construction is considered moderate for a beach of small scale at -3.8 ft/yr.

A beach existed along Ward Island prior to the occupation of the island and the Encinal Peninsula by military in the early 1930’s. Interpretation of aerial photographs indicates that there was abundant sand along the shoreline (the light regions on the images) from Ward Island to what is now Naval Air Station-Corpus Christi. 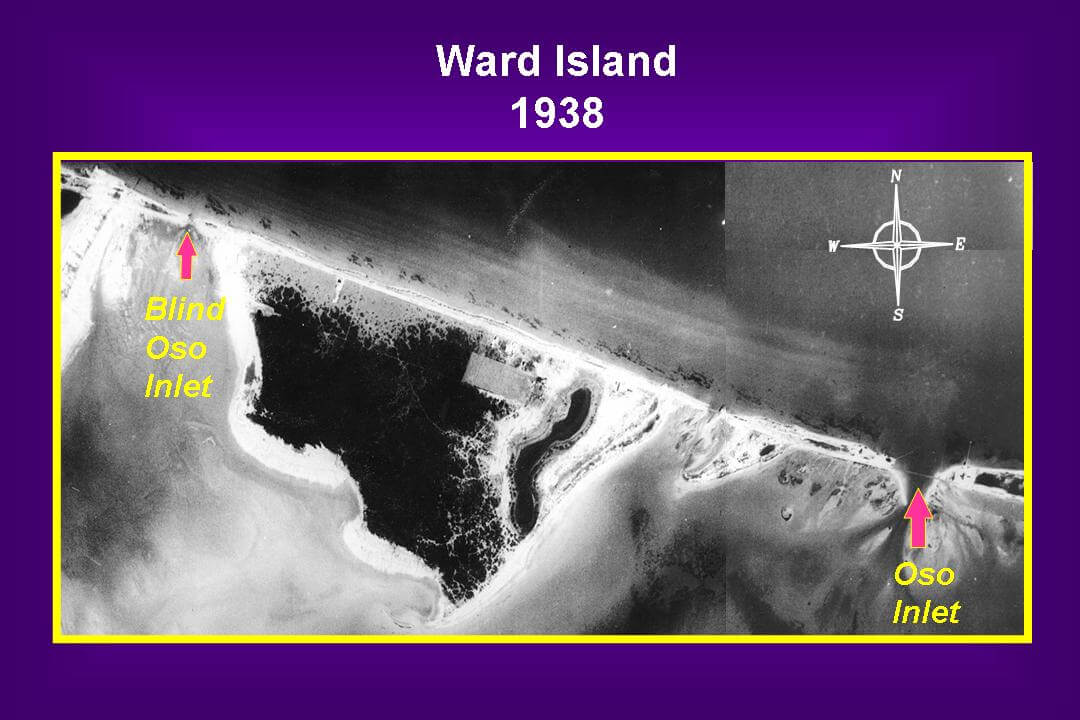 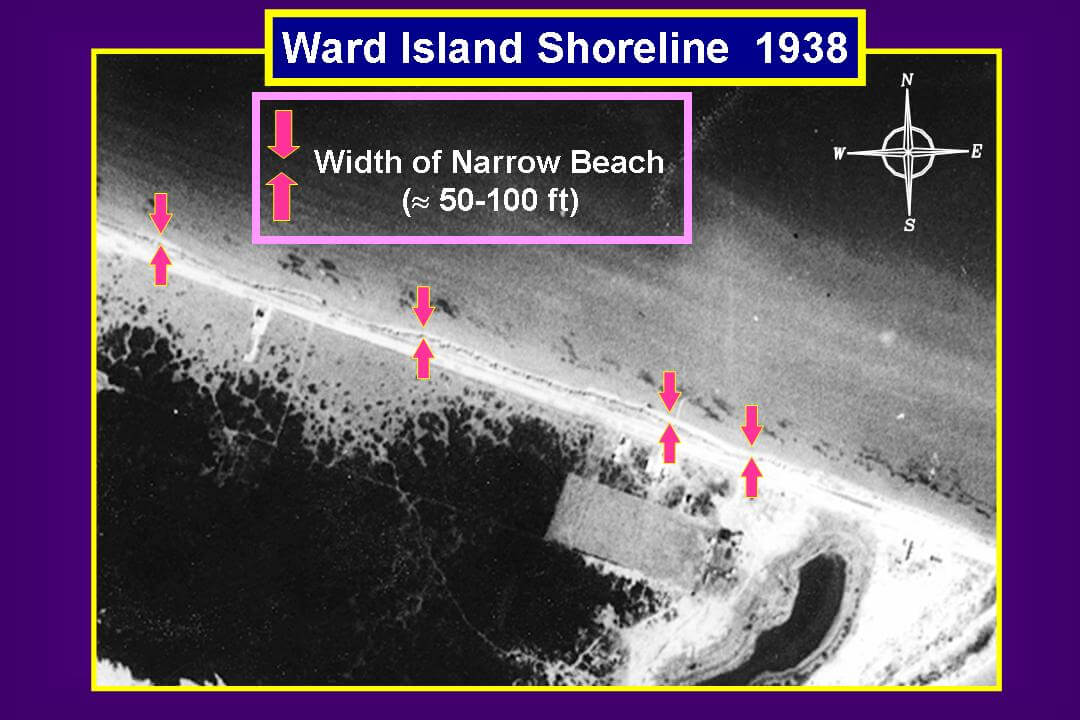 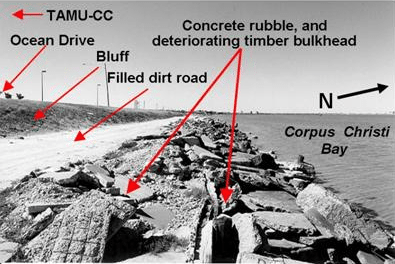 For over 50 years the use of the Ward Island shoreline was limited by the methods applied to stabilize it for use as a military facility. Although nourishment and re-nourishment are typically used when describing placing sand on beaches in need, University Beach was constructed in a location where no beach had existed for over 60 years and is considered a restoration. The purpose of this project was to restore the beach and associated habitat along Ward Island, thereby providing access to Corpus Christi Bay for the local community, University and visitors for diverse uses.

Corpus Christi Bay was formed by large-scale fluctuations in sea level associated with repeated advance and retreat of continental ice sheets during the Quaternary Period. The Corpus Christi area is located in the South Texas Coastal Plain Province and is predominantly composed of Pleistocene fluvial and deltaic sediments of the Beaumont Formation. Price (1958), White et al. (1983), Morton and Paine (1984), and Shideler (1986a, 1986b) describe the geologic history, geomorphology, and sediments of the Corpus Christi Bay area. Eroding Pleistocene clay bluffs surround the bay on the majority of the southern, western, and northern shorelines. The shallow bay has an elevated nearshore periphery primarily composed of fine sand with a median grain size diameter of 0.13 to 0.25 mm (White et al. 1983). Longshore sandbars ring the bay, particularly along the southeast and eastern shorelines. Bay-center sediments are composed of fine silt and mud with a median grain size diameter ranging from 0.002 to 0.008 mm.

Ward Island is a remnant of the Nueces River/Oso Creek deltaic complex. The fluvial-deltaic-estuarine deposits present in a core taken on the southeastern side of Ward Island indicate that the island has undergone multiple transgressive regressive sequences (Shideler, 1986a). The top 14 ft of recent sediments is predominately clayey-silt and silty clay. These clay deposits are covered with a thin surface layer of Recent, medium sand indicating a transgressive fluvial-estuarine sequence. These recent sediments are deposited on fluvial and marine deposits of the Beaumont and underlying Lissie Formations. 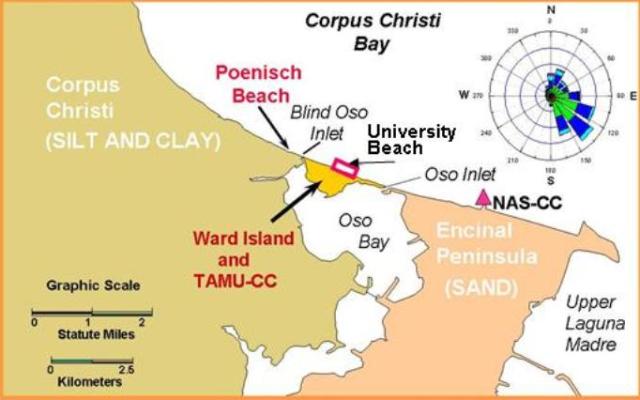 Two distinct land masses border Ward Island (See image) (Shideler 1986a). To the west lies the Corpus Christi mainland, which is composed of fluvial and deltaic clay deposits of the Pleistocene Beaumont Formation. In contrast, the Encinal Peninsula, a surface expression of the Ingleside sand body, also of the Beaumont Formation, lies to the east. Evidence suggests that the Encinal Peninsula was once a barrier island much like Padre Island. Naval Air Station-Corpus Christi (NAS-CC) presently occupies the entire northern shoreline of the Encinal Peninsula. When the EnCana Peninsula was developed the shoreline was stabilized effectively eliminating one of the primary sources of sand for beaches along Corpus Christi Bay.

University Beach, located adjacent to Texas A&M University-Corpus Christi along the northern shoreline of Ward Island, was selected as the prototype for the development of CHRGIS because of the extensive data set available for this location. Prior to construction, the shoreline was completely devoid of a beach and consisted of a deteriorating timber bulkhead as well as discarded concrete and construction materials.

The restored beach, a beach fill consisting of 50,000 cu yd of beach-quality quarry sand, was placed to restore a 1,200 ft section of beach that had eroded some 60 years ago. 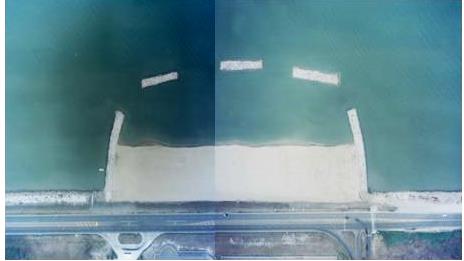 The public recreational beach was completed in August 2001 after 5 months of construction and nearly 7 years of research and planning. The project was made possible through the cooperation and support of The Texas General Land Office (Coastal Management Program and Coastal Erosion Planning and Response Act), Texas A&M University Corpus Christi, The Conrad Blucher Institute for Surveying and Science, the City of Corpus Christi. CBI collaborated with Shiner Moseley and Associates (Now HDR, Inc.) as they developed the final engineering specifications from the functional design.

The evolution of this restored beach was monitored to determine trends in shoreline change, sub-aerial and nearshore morphology, volumetric change, and sand grain size distribution. The monitoring program was initiated to document these changes in an effort to more effectively manage this restored resource. Of particular interest is the analysis of the most effective method to manage changes in sand distribution in the system (system being defined in this case as the region confined by the coastal structures). To put it another way, management may be defined as where to place more sand, how much to place, when to place it and where to obtain it (self-sustaining or transported from quarry). 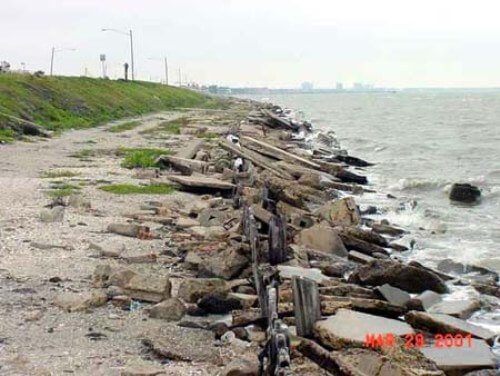 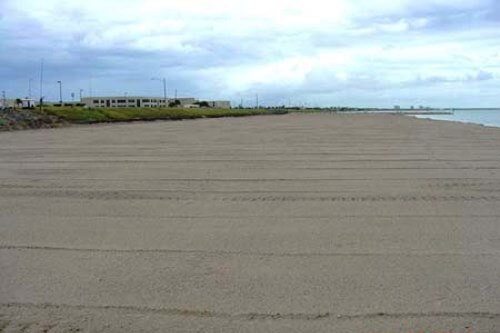 View of University Beach looking west after completion in August 2001.

Key components of the monitoring program:

Purpose of the beach monitoring program:
* Document the evolution of a restored beach along a developed shoreline
* Anticipate and assess sand management needs for planning purposes
* Determine any impact of the project on the adjacent shoreline
* Provide an example of post-restoration management of a beach resource for other bayside communities with similar concerns related to loss of naturally occurring beaches.

A primary goal of the monitoring program is to identify trends and assist resource managers in anticipating where, when and how much fill material should be relocated along the existing dry beach to maintain its integrity and promote project longevity. 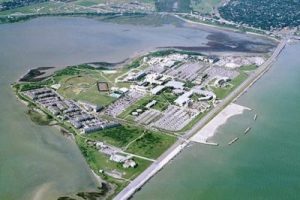