The Sargent Beach study area encompasses approximately 4 miles of shoreline along Matagorda Peninsula in Matagorda County.  The west-end of the larger uninterrupted beach terminates at Mitchell’s Cut while the east-end is bordered by Cedar Lakes Pass, a small ephemeral inlet.  The Mouth of the Colorado River is located approximately 20 miles to the southwest and the Brazos River and Freeport Ship Channel are located approximately 15 miles and 22 miles, respectively, to the northeast.  Sediment transport into the area is limited by both the proximity of Mitchell’s Cut at the west end and larger inlets to the north (Freeport Ship Channel) and south (Mouth of the Colorado River) which together compartmentalize the region. Thus, Sargent beach is isolated, with regard to sediment transport, resulting in finite sand resources and historically high rates of shoreline erosion.  Alongshore sediment transport is predominantly directed toward the southwest along this coastline, confirmed by continued migration of the beach fill placed during the spring of 2013.

Sargent Beach is unique to the CEPRA Beach Monitoring Program in that it is the only Gulf beach in the program that is located along a clay substrate mainland peninsula rather than a barrier island. The beach is composed of a veneer of sand that overlays a clay substrate. The GIWW is located very close to the Gulf of Mexico in this area and was constructed by excavating the Matagorda Peninsula to leave a narrow section of the peninsula isolated between the GIWW and the Gulf.  Persistent erosion has threatened to breach the GIWW, therefore in 1998, an 8‑mile long revetment was built landward of the shoreline in anticipation of continued erosion and subsequent shoreline recession. The top of the revetment remains intermittently exposed along the entire study area.  The project did not provide for beach maintenance and nourishment and therefore erosion has persisted with the shoreline at or approaching the edge of the revetment east of FM 457.  The clay substrate is exposed intermittently along the beach face, particularly west of the nourishment area.   Continued erosion has resulted in a narrow beach that potentially limits public access.  In an effort to restore and maintain access to this section of the coast a beach nourishment project was initiated at Sargent Beach (CEPRA 1532, Cycle 07) during 28 January 2013 and completed 13 March 2013.

Historic review of data and shoreline position change on a larger central to upper Gulf Coast scale has been described in detail by Morton and Piper (1974) and Stauble et al (1994).    Thomas and Dunkin (2012) reported on historic change, derived primarily from BEG shoreline data, specific to the Matagorda Peninsula.  The dominance of high rates of erosion and shoreline recession has been well documented.  Seelig and Sorenson (1973) specifically describe erosion at Sargent Beach and the contributions of historic change in neighboring inlet and river systems along with a discussion of coastal processes acting along the central Texas Coast.  Stauble et al (1994) described the high rate of shoreline recession in this region as attributed to the clay composition of the peninsula where the terraces break off in cohesive units resulting in a shoreline that recedes at a higher rate than regions composed completely of sandy material.   Furthermore, Stauble discusses the limitations associated with quantification of sediment transport and model application at Sargent Beach due to the clay substrate underlying the beach at Sargent. Previous studies in this area conducted by Stauble (1994) and Thomas and Dunkin (2012) provide a review of historic analysis based on trends in shoreline recession interpreted from aerial photography as well as limited historic beach profile data and a Lidar data set (2000).  These previous studies were in support of large-scale analysis of shoreline change as applied to the investigation of structural alternatives to limit erosion along this section of the coast. 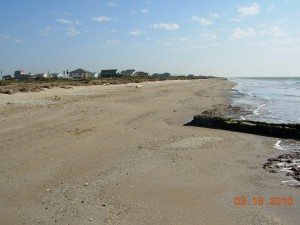 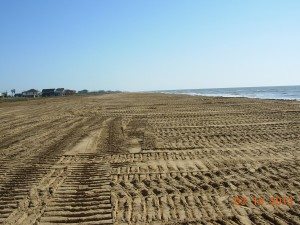