Quintana Beach refers to the approximately 3-mile stretch of Gulf beach that is located southwest of the Freeport Ship Channel and northeast of the Brazos River.  Sediment transport is largely compartmentalized due to limitations imposed by the inlet to the east and river to the west.  Bryan Beach, Cortez Beach as well as Quintana County Beach Park are located in this area.  The majority of this region is within CBRA boundaries, excluding the 2,000-ft long region defined as Bryan Beach.  Prior to 2014, the monitoring effort included Cortez Beach which is located approximately 1.4 miles west of the south Freeport Jetty, and north of Bryan Beach. Cortez Beach was not surveyed during 2014 and 2015 because it is located within the CBRA boundary.  The Bryan Beach project area is located less than 1‑mile south of Cortez Beach and is bordered to the south by Bryan Beach Road.  There are limited historic data available describing this section of Quintana Beach in its entirety.  In addition, with the removal of the Cortez Beach survey, the 2014 and 2015 survey extent no longer extends to the Freeport Ship Channel, which limits a more comprehensive investigation of sediment transport south of the Freeport Ship Channel. This reporting focuses on changes occurring at Bryan Beach between 2014 and 2015 in the context of the previous reporting describing changes observed since the 2005 nourishment and more limitedly since 2000 with regard to shoreline position change.

Three CEPRA nourishment and dune restoration projects have been completed at Bryan Beach. A dune restoration project was completed during Sep 2003 (CEPRA 1154) and subsequent nourishment conducted during Mar 2005 (CEPRA 1175).  The more recent nourishment completed during Feb 2016 (CEPRA 1571) was a FEMA Public Assistance program repair related to beach loss during Hurricanes Ike and Rita.  The original placement (2005) extended along a 1,850-ft section of beach.  Additional stabilization though the placement of sand fencing along the dune line as well as planting of vegetation and placement of Christmas trees has been implemented by Brazoria County.  In addition, Cortez Beach may have indirectly benefited from offshore placement of sand dredged from the Freeport Ship Channel as well as sand eroding from the nourishment efforts at Surfside Beach located just north of the Freeport jetties.  It is difficult to quantify the contribution of these placement activities, particularly at Bryan Beach which lies well west of the placement areas. The most recent nourishment project was completed at Bryan Beach during February 2016 and therefore the influence of this placement is not reflected in the present reporting period.

Quintana Beach is located southwest of the Freeport Jetties. This stretch of beach is broken into two study regions defined as; 1) Cortez Beach located near the Town of Quintana and closest to Freeport Ship Channel and 2) Bryan Beach located less than 1-mile south of Cortez Beach and bordered to south by Bryan Beach Road. Analysis of sediment transport and interpretation of morphology is challenging due to the lack of adequate historic data coverage both in the region between Bryan and Cortez Beach as well as between Cortez Beach and the Freeport Jetty. The more extensive survey grid applied during 2012, and recommendation to extend future surveys to the jetty, will provide for a better understanding of sediment transport at Quintana Beach.

Although only one nourishment and dune restoration project has been completed (Spring 2005) at Quintana Beach there has been subsequent stabilization though placement of snow fencing along the dune line as well as planting of vegetation and placement of Christmas trees by Brazoria County as recently as 2012. In addition, the beach may benefit from offshore placement of sand dredged from the Freeport Ship Channel as well as sand eroding from the nourishment efforts at Surfside Beach located just north of the Freeport jetties. It is difficult to quantify the contribution of these unassociated activities. The final report will address the potential impact of offshore placement of dredge material as information is provided by the USACE. 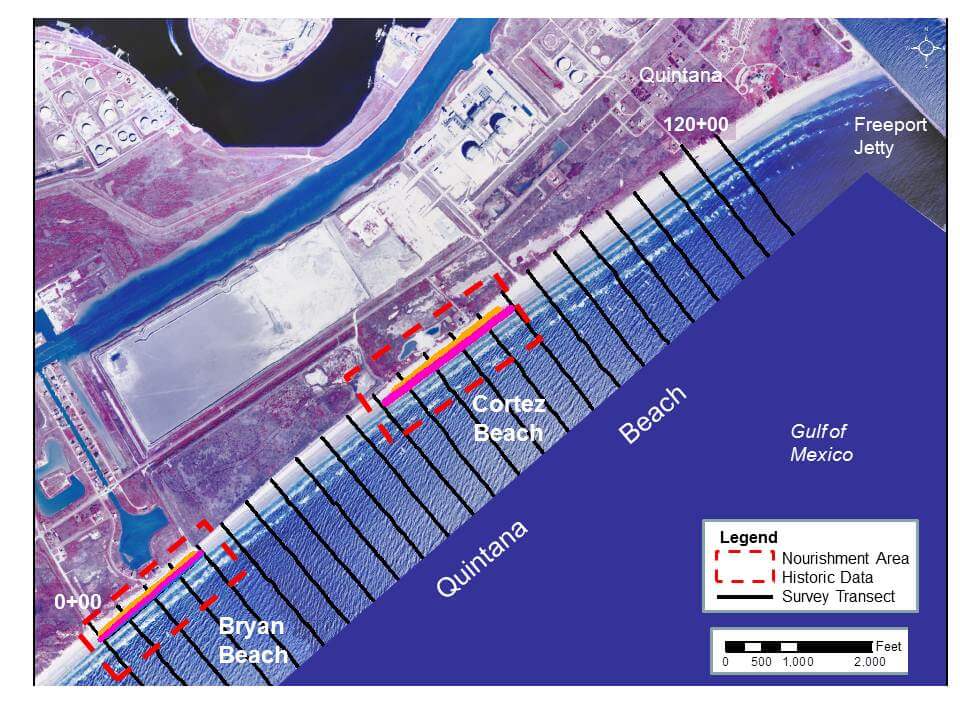 Location of the Cortez and Bryan Beach study sites within the Quintana Beach limits.