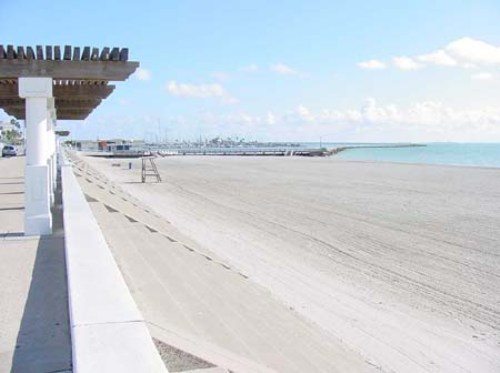 McGee Beach is located along Corpus Christi Bay fronting the seawall in downtown Corpus Christi.  The beach is bordered by the Corpus Christi Municipal Marina breakwater to the north and an approximately 400-ft long terminal groin at the border of Emerald Beach to the south. The nearly 1,800-ft long beach is further stabilized by five low-elevation, typically submerged, groins spaced at 300-ft intervals. Due to the extent of the surrounding coastal structures sediment transport is relatively compartmentalized at McGee Beach. The beach was last nourished in 2003/2004 (CEPRA Cycle 2), including modification by placement of a sand veneer to improve sand quality.

Monitoring began in 2007 (CMP Cycle 9) with surveys subsequently conducted during 2007 (CMP Cycle 9), 2009 (CMP Cycle 12), 2012, 2014 and 2015.  A small nourishment effort originally planned for the south end of the beach near the terminal groin was recommended during 2012 reporting. Implementation was differed by the City of Corpus Christi due to the focused nature of the narrow region with intent to maintain through mechanical sand redistribution during maintenance grading.  Although McGee Beach is relatively stable, previous analysis established that sand exits the beach system both to the north, beyond the marina breakwater, as well as to the south beyond the terminal groin at McGee Beach.  The pathway of exiting sand is dependent on seasonal and storm generated reversals in wind direction and wave approach.  There is limited opportunity for sand sharing from the adjacent nearshore and from Emerald Beach due to the widespread application of coastal structures that limit alongshore sediment transport in this region of Corpus Christi Bay.  After a previous period of relative stability, shoreline recession dominated at McGee Beach during the 2014-2015 study period with a rate of change in shoreline position of -7.0 ft/yr, the highest observed since monitoring began during 2007.  The high rate of shoreline position change was attributed to a period of extended inundation with waters in excess of MHHW in association of the influence of Tropical Storm Bill (water level > 1.3 ft MHHW) during June 2015 and Hurricane Patricia (waterlevel > 2.0 ft MHHW) immediately preceding the November survey during Oct 2015.